Over the next month or so Intel is scheduled to launch its next-generation Tiger Lake family of processors. Detailed in bits and pieces over the past several months, Tiger Lake will be Intel’s third 10nm-based CPU family and will incorporate the company’s Willow Cove CPU architecture as well as the first integrated GPU based on their new Xe GPU architecture. With that launch quickly approaching, Intel’s investor site has posted notice that the company will be holding two Tiger Lake-related events over the next month, with presentations scheduled for August 13th and September 2nd.

First off, on August 13th Intel will be holding a presentation they’re dubbing “Updates From Our Chief Architect”. The event is set to be run by Raja Koduri, Intel’s chief architect, as well as the general manager of Architecture, Graphics, and Software groups. No other details are being offered about the event at this time – which is typical for investor event announcements – however given Koduri’s background in graphics we can easily make some educated guesses about what will be presented. 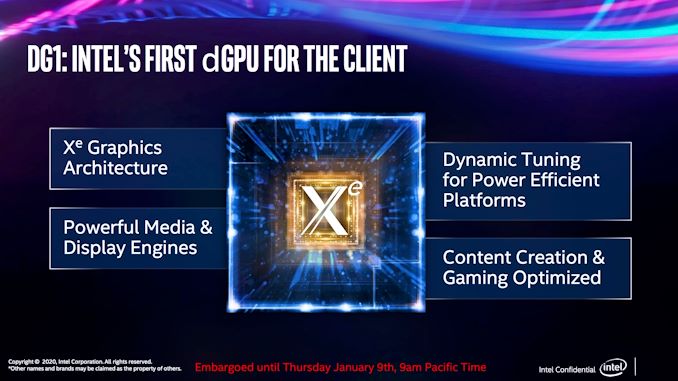 Intel to date has offered very little in details about the Xe-LP GPU architecture that will be going into Tiger Lake (and the DG1). So with Koduri helming the event we’re expecting to finally get some major Xe-related graphics architecture disclosures. Whether we should expect to see similar updates for the CPU side of Tiger Lake (Willow Cove) is a bit more nebulous, however; Koduri is Intel’s chief architect for a reason, but it’s well-known that his primary duties at Intel are GPU-related. But regardless of whatever is disclosed, it’s clear that this is going to be an architecture-focused event, as Intel has scheduled a second, later event as the official Tiger Lake launch.

On September 2nd, Intel will be holding their “Tiger Lake Virtual Launch Event”. Even fewer official details are available about this event, but in this case the name says it all. Normally Intel would be holding an in-person event of some kind for the launch of a new CPU platform, however with a coronavirus pandemic going on, everything in the near future is being done virtually. So we’re expecting this event to offer a similar level of detail as past launch events, covering whatever details don’t get included in Intel’s architectural presentation, as well as more direct product details such as SKUs and chip configurations.

Overall, Intel has indicated that they’re planning for a fairly aggressive ramp-up on Tiger Lake – to the tune of 40% more chips than they previously intended – so we should see Tiger Lake products soon after that. However, it’s been a long while since retail products were available day one for an Intel mobile-first launch, so we’re not expecting to have hardware in-hand or in stores on the 2nd.

As always, AnandTech will be covering these events. So please be sure to check in on August 13th and September 2nd for the full scoop on Intel’s Tiger Lake processors and related technologies.